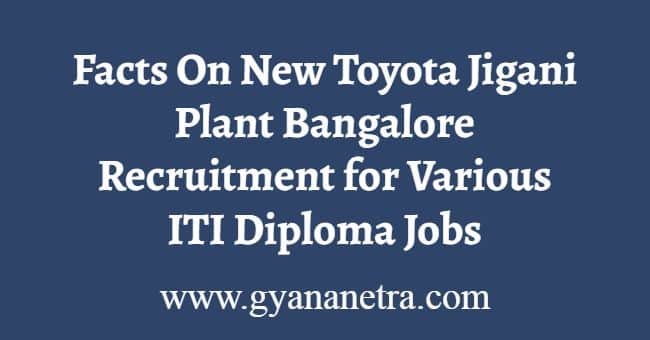 Toyota Jigani Plant Recruitment 2020 Apply for Various Jobs in New Toyota Plant in Jigani Bangalore. Every Year Toyota Industries Corporation recruits candidates with suitable qualifications in positions such as Engineer, different Trades, Supervisory in various departments etc. As per requirement at various plants across India and abroad these vacancies are filled with suitable candidates. Such is the position with the plant in Jigani Bangalore which is the car engine manufacture plant. The Toyota recruitment takes place directly through the group of companies. Candidates willing to these jobs need to visit these company websites or visit the company itself directly.

Recently information on the recruitment at New Toyota plant in jigani Bangalore is being circulated. Many candidates as far as we now are looking for information about this Toyota Jigani Plant Recruitment. There are various speculations about these jobs.

As far as we know there is not such recruitment being going on in Toyota Jigani Plant. Any notification about these jobs is not available at the toyota careers page at the website tiei.toyota-industries.com. This can be a fraudulent notice about the Toyota Jigani Plant Recruitment 2020. We recommend everyone not to believe that such a recruitment is going on at this new plant in jigani bangalore.

There is a confirmation message from the company stating that there is no new establishment of Toyota Plant in Jigani Bangalore. So candidates who are looking for this information that this is a fake recruitment. Everyone need to be aware of the fraudsters who are looking to offer jobs in this new plant.

Toyota New Plant in Jigani Bangalore is a Fake Recruitment 2020. The company has warned the students from ITI and Diploma not to believe that such recruitment is going on. Students from these certifications can also look for various govt jobs in different departments of the respective states rather than falling into a victim of these fake recruitments.

So students need to be cautious about this Toyota Fake Recruitment. If you are looking for actual jobs in toyota, you have to check the latest updates from the official website of the toyota industries corporation or directly visit the company hr department.

The Office Notice From Toyota Industries Corporation States that

It is brought to the notice of the management that in the last few days in many social media a false message is being spread by some miscreants and it is becoming viral. In the message it is mentioned that new Toyota plant is opened in Jigani and there are vacancies for ITI and Diploma students along with mention of interview dates and salary.

The management wishes to clarify that this social media message is totally false and untrue. Hence, we wish to inform the public not to get misled and to ignore the message. Public are hereby informed to check the correctness of the message directly with the Company. Company will also initiate necessary legal actions against the miscreants.

To confirm this you can find the official public notice at tiei.toyota-industries.com. This is the official website for Toyota Jigani Plant in Bangalore.

Important Links to Consider if you are looking to Jobs in Toyota: