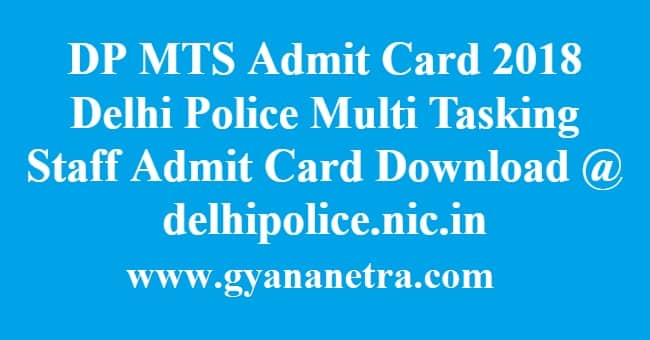 DP MTS Admit Card 2018 Delhi Police Multi Tasking Staff Admit Card Download @ delhipolice.nic.in. The Delhi Police in the year 2017 of December has announced the process initiation for the recruiting eligible candidates for various multi tasking staff vacancies. The MTS Civilian Vacancies are of a considerable number. So there has been a huge response and the Delhi police have taken their time after the application submission for the release of the Delhi Police MTS Admit Card 2018. Using the information from the website www.recruitmentonline.co.in, which is the portal used to submit the application in Dec 2017 and Jan 2018, we have now come up to provide the delhi police mts exam date 2018 and admit card latest news.

From the detailed advertisement of this jobs, it is very clear that for each post the selection process has a written test. For this test the DP MTS Admit Card 2018 is necessary. The Mode of Recruitment is OMR. So candidates who have to attend this optical mark reader examination should be aware with this kind of exam. This omr exam has 100 questions, which constitutes of three parts. After this written test trade test is applicable to those who qualify.

At Present the Delhi Police MTS Admit Card Download Portal www.recruitmentonline.co.in states that the admit card will release shortly. This article will update the date and the link for the delhipolice.nic.in admit card for you to download it and attend the exam

About the release date of the delhi police mts admit card we could not provide complete information. But for sure we will shortly provide the information from this article.

All the posts under this are of Group C Cadre, Non-Gazetted, Non Ministerial jobs. Them Delhi Police MTS Admit Card 2018 Latest News Suggest that this is going to release shortly from www.recruitmentonline.co.in website.

In Written Test, the topics and its associated marks are

The total marks of the exam is 100, Just 90 minutes is the duration provided the candidates who are permitted to the exam hall with DP MTS Admit Card 2018 to complete the test.

Candidates with PWD, who uses the scribe will have additional times as per the norms of the Delhi Police jobs.

Apart from the DP MTS admit card 2018 candidates have to carry board/clip board, two blue or black ball point pens for the written test.

After the test, the carbon copy of the answer sheet is allowed to be taken by the candidates. This can be utilized to know the performance when the Delhi Police MTS Answer Key is officially announced.